By Adolfo Salgueiro on January 23, 2023 in Masters Runner, Motivation I still can’t believe that it has been 40 years since my first marathon. Four decades since that unforgettable January 22nd of 1983 inside the old Orange Bowl Stadium in Miami.

14,610 days have passed since that unprepared 17-year-old teenager crossed a finish line that became the gift that kept on giving.

Since I can remember, I wanted to run a marathon. Not sure why. Maybe because I read about the athletics exploits of Abebe Bikila, Emil Zatopek or contemporaries like Frank Shorter and Bill Rogers. Who knows? Somehow, I always loved the extremes.

40th Anniversary of My First Marathon

I started running when I was 12 or 13 while living in Caracas, Venezuela, and at 15, ran my first 10K race. Then, a couple of months after turning 17, my dad told me he was running the Orange Bowl Marathon in January 1983, and if I trained, he would take me to Miami.

Maybe I just wanted the trip and a few days off school, or it could have been a legitimate attraction for the physical challenge. Regardless, what I know is that 6 weeks later I was lining up at the foot of the iconic home of the Miami Dolphins, who eight days later were taking the Washington Redskins in the Super Bowl.

I’ve written before about that race. So, on this anniversary I don’t want to reminisce about that particular day, but on what the race has meant to me throughout my life. Last year, on the 39th anniversary of the marathon, I wrote a memoir about that day because I didn’t want details to be forgotten. If you would like to read more about it, please click here. I also wrote a post about getting my finisher’s medal 37 years later, back in 2020.

After that magical morning, 40 years ago, even if I never ran another step in my life, I was a marathoner. It is a label that sticks forever. It doesn’t fade away with time, or by forgetting the exact date and finishing time, or by never wearing a pair of running shorts again. 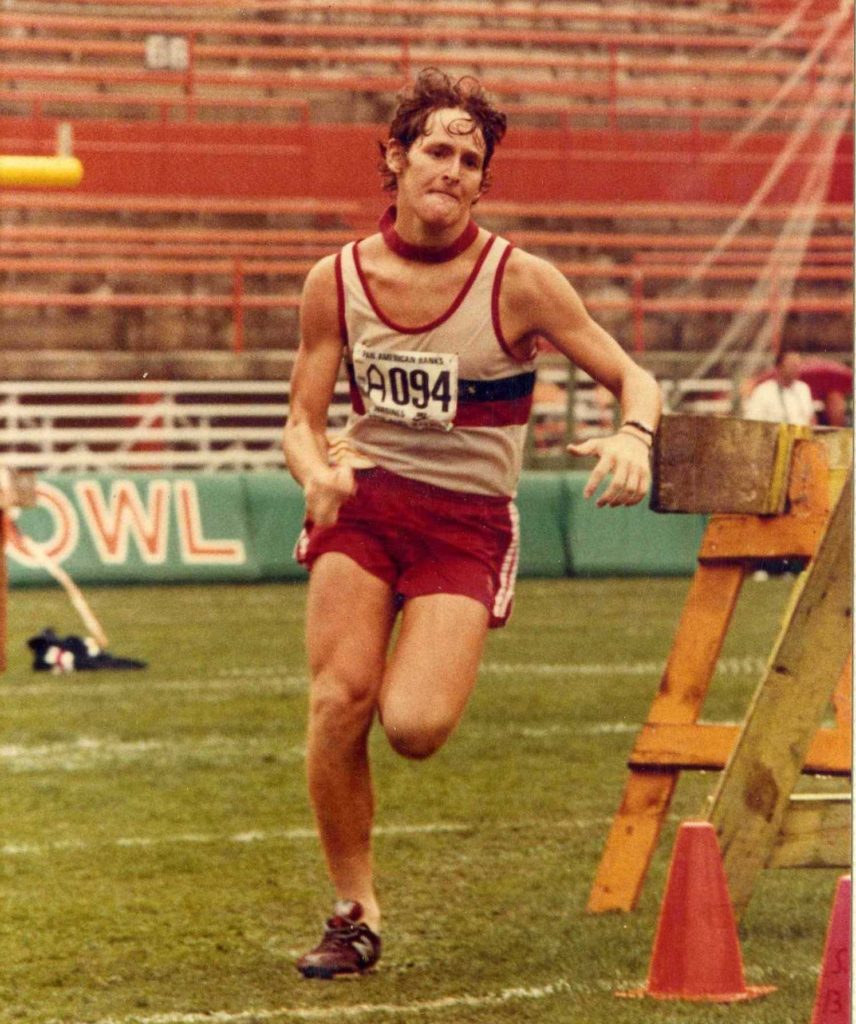 I kept running for a handful of years after my first marathon. By the time I turned 21 I had four under my belt, with a couple of them in the 3:30 range. I ran through my first three years of college and even had escalated disagreemtns with my girlfriend, who at times was fed up with not going out with our friends on Saturday nights because I had a Sunday morning long run. Many a time I had to put my foot down and state that I would drop he before my training. Today I would have handled it in a different way, but that was then.

As I have mentioned in other writings, as I was training to go sub-3 in 1986, I had a devastating non-running injury on my left knee that left me on the sidelines. It was such a demoralizing blow that I stopped running for decades.

While not running I discovered the pleasures of sleeping in on weekends. I didn’t want to have the same issues with new girlfriends, so I went out partying on Saturday nights, and on Friday nights, too.

I focused on getting my career in sports journalism started, graduating from college and all the stuff “normal” people do when they don’t need to wake up early to run long next day. The day I turned 18, I went to bed at 8PM because I was running 30Km (19 miles) next day as part of my training for the NYC Marathon. What a weirdo!

Yet, somewhere deep inside, I always knew I had one more marathon in me. Just one, to remind myself I could still do it, or to fool myself thinking I was still as good as when I was a teenager, or to revisit old glories, or to show my young son what you can accomplish when you work hard towards a difficult goal. Whatever it was, I still wanted to hit the asphalt and take that 26.2 trip once more. Just once.

But sometimes you cross paths with the wrong people and they clip your wings. At 39, after a 2nd knee surgery in July 2004, I told the doctor I still had one more marathon in me and asked if he thought my knee could take it. He told me in no uncertain terms that I shouldn’t and couldn’t. I was stupid enough to take his word for it.

But one day, out of the blue I started walking for hours at a time, feeling good about it and experiencing the runner’s high once again. I found racewalking and then racewalked four half marathons, transitioning to the 26.2 at the 2012 Philadelphia Marathon. Three years and two marathons later I realized that I just took the doctor’s word and did not run because he said so, not because I tried and failed. So, I got my running restarted and ran my first marathon since 1985, in 2017. Five years, four marathons and an open-heart surgery later, I am still running and looking towards my next 26.2-mile adventure.

The Marathon Training Academy podcast runs a great tag line: “You have what it takes to run a marathon and change your life”. I certainly had what it took to run it again, and my life hasn’t been the same since I completed that 2017 NYC Marathon after I became a runner for the 2nd time; nor since I racewalked the Philadelphia Marathon in 2012 after a 26 year hiatus, nor after that magical morning at the Orange Bowl Stadium, 40 years ago, this week, when my lifetime love affair with the mythical 26.2 monster got started. Adolfo Salgueiro is a communications professional with more than 30 years of experience currently working in the real estate industry in Florida. He ran his first full marathon at age 17 and after a 20-year hiatus has been back hitting the asphalt since 2008. He has completed 11 marathons with a personal best of 3:32:08 in Caracas, Venezuela, in 1984. You can find him at www.foultips.run
View all posts by Adolfo Salgueiro →
It’s Worth It!
Interview with Emily Sisson

2 Responses to 40th Anniversary of My First Marathon