By Angie Spencer on October 11, 2016 in Podcasts, Race Recap In this episode we recap the 2016 Berlin Marathon in Berlin, Germany which is one of the six World Major Marathons and one of the best race experiences we’ve ever had.

Our travels took us from St. Louis to Boston to Oslo Norway to Berlin. We rented a car and drove to Wittenburg where we stayed at Brauhaus Hotel the first night. The food was great and Trevor had many chances to try out his German vocabulary.

The next day we toured the cathedral in Wittenberg and then drove to Bonn and stayed with Academy member Edith Rian. She took us on a 12 kilometers hike to the amazing Berg Eltz castle. At the Berg Eltz castle with Edith

Saturday afternoon before the marathon we meet up with about 25 podcast fans in front of Starbucks near the Brandenburg Gate. It was one of our best meet ups to date. Trevor joked that we might have more fans in Europe than the USA. We even had a surprise appearance by ultra runner and world record holder Mike Wardian. MTA meet up in Berlin

The marathon expo was held at Station Berlin and it’s a wise idea to take public transportation to get there because of the lack of parking. The expo was open Thursday afternoon, Friday afternoon/evening and all day Saturday (and it was very busy on Saturday).

The expo was huge with multiple rooms full of products and booths. Packet pick up was located near the front and we were required to show our race Start card and photo ID to get the bib (be sure to pick up safety pins from the counter at bib pick up if needed). You cannot have someone else pick up your bib for you.

You also get a wristband that you’re supposed to wear until after the marathon which is your entry into the starting area. The race shirt is optional and must be purchased at registration. We didn’t remember this fact and went to the very back room of the expo to find out that we didn’t purchase a shirt.

Another thing that seems to be unique to some European races is if you don’t own a timing chip you can choose to rent one and return it to a designated location post-race. Expo swag included some snacks, body wash and a sponge. They also had a biergarten set up at the expo (which was very popular). Angie at bib pickup. MTA’er Marc Glorioso in the background. The marathon also puts on a free 6k breakfast run on Saturday morning which ends in the Olympic Stadium(around 11,000 people participated). There is also a skate marathon and kid’s race held on Saturday which means that the race course is closed during that time.

We stayed at the Meininger Hotel near the main train station and this made it very convenient to get to the starting area in Tiergarten (and actually most places in the city). The rooms were small but clean.

Race morning dawned bright and clear for the Berlin Marathon on Sunday, September 25, 2016 and we had to walk around 1.5 miles total from our hotel to the starting corrals. I also made use of the gear check and the port a pot. It was nice that the race start time was a bit later than normal which gave us plenty of time to navigate the crowds and get to our starting corrals. There were very long lines for the port a pots and many men (and women) were just urinating in the park. There wasn’t any toilet paper by the time I got to use the bathroom so that would be a helpful thing to bring to the starting area. I thought the starting area was well marked and there was a gate section manned by a volunteer to make sure each runner got in the correct corral of A-H. I was in F corral but placed myself near the back because I wasn’t in shape to run very fast. The starting line area was great too.

Even though there were thousands of people they had large screens and speakers in each corral so we could see and hear the start and announcements (which were done in English and German). Wheel chair/hand cycle athletes started the marathon at 8:50 am followed by the elites and then the remaining runners started at 9:15 am.

I talked to a couple ladies from CA before the start but it seemed like there weren’t a large number of those from the US represented. The race discouraged headphones but I saw a lot of people wearing them. As the race got started they released hundreds of white balloons.

The starting and finishing areas are in Teirgarten. They had a very clear course map as well as an interactive map on the race website so you could study the course in advance. And Berlin is known as a flat and fast marathon and world records are often set there.

The course markers are in metric so it’s a wise idea to make sure that you’re familiar with this system so that you can stay on track with your pacing and fueling. A blue racing line (the tangent) is painted on the course so you can run the minimum distance if you’re paying attention.

I found the course to be generally wide enough to accommodate all the runners comfortably although it is a crowded course throughout. They had several arches (with sponsors names) along the course that you ran through (not to be confused with the final finishing area). As you near the finish line you run through the iconic Brandenburg Gate which is exciting. A spectator at the Berlin Marathon

The aid stations were good for such a large race. They had water and sports drink at most aid stations and some had hot sweetened tea, gels, apples and bananas. The water was dipped from containers by volunteers in gloves and often you just had to grab a cup off the table because of the crowding. Fortunately they offered drinks on both sides of the road.

I used my usual servings of Generation Ucan which worked like a charm! I’ve now done over 30 races with Ucan!

One unusual thing at the aid stations was that they used hard plastic cups which made a loud crunching sound as they were trodden under foot and were a bit slippery. The medical stations were plentiful and they also had medical personnel on bikes out on the course. The weather was beautiful in the low 50’s F. at start and low 70’s at finish (10-21 degrees Celsius). The sun got a little warm toward the final few kilometers but they had some misting stations that you could run through and plenty of fluids out at aid stations. There were a good number of bands (particularly drums) along the course and high energy from the crowds. 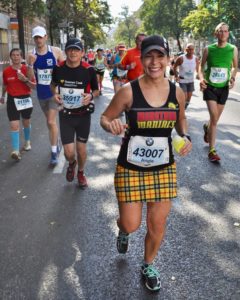 I didn’t run the smartest race because during the first 10k I allowed myself to be swept along at too rapid of a pace. I probably paid for it later in the race but it was fun at the time. During the first 5k I had a sharp pain on the top of my right foot which worried me a bit but that eventually went away to be replaced by my upper hamstrings both seizing up after mile 10.

For the most part I just tried to ignore my bodily complaints and enjoy the scenery and atmosphere of the race. I saw fellow Marathon Maniac Anders from Sweden (known as the biking Viking) along the course.

It was also fun to see LeAnn from Boston, Marc- one of my coaching clients, MTA listener Stephanie from Canada, and MTA listener Gaute from Norway. I also saw MTA member Judith during the last 2k and we talked and then congratulated each other afterward. I finished in 4:50:02 and Trevor in 5:11:53. Out of 41,283 registered for the marathon there were 36,054 who finished. You finish by running through the Brandenburg Gate.

The winner was Kenenisa Bekele of Ethiopia who just missed a world record by 6 seconds. He finished in 2:03:03 ahead of Wilson Kipsang of Kenya in 2:03:13. Evans Chebet of Kenya finished third in 2:05:31. The elites used pace rabbits for the first few kilometers (seen in the black and white stripped singlets). The female winner was Aberu Kebede of Ethiopia in 2:20:45, she was three minutes ahead of Birhane Dibaba of Ethiopia in 2:23:58 and third place woman was Ruti Aga in 2:24:41.

Michael Wardian ran 2:28:19 at the Berlin Marathon, continuing his quest to run all six of the World Marathon Majors in 2016 faster than anyone in history. He’s averaging about 2:28 with only Chicago (Oct. 9) and New York (Nov. 6) remaining.

After crossing the finish line we had to continue walking for a few yards to get a space blanket, a very nice medal, water and food bag (dried apricots, pastry, nuts, energy bar, apple and banana, Erdinger alcohol free beer). Then I went and dropped my timing chip off and made my way to the gear check area which was very efficient. They also had post-race massages with long lines and a portable shower areas. I enjoyed my Erdinger beer as I walked the half mile back to our hotel.

After we rested and showered that afternoon we walked back to the Tiergarten area and ate dinner and had an evening tour of the Reichstag Building. All said we put 32 miles on our legs that day and it was well worth every mile. The next day we did a walking tour of Berlin and got in 8 miles of walking. Beer at the finishing area Also Mentioned in This Episode
Generation Ucan – fuel source to keep your blood sugar stable and burn fat. Use the code MTABERLIN to save 15%.

Performa Sleep – mattresses designed specifically for those with an active lifestyle. Use the code marathon to get $125 off plus free shipping!

The Runner’s Toolbox -eight inexpensive items to keep around the house to fight running injuries and mishaps.

Angie is a registered nurse and running coach who empowers new runners to conquer the marathon, run faster, and take their health and fitness to the next level. Join the Academy
View all posts by Angie Spencer →
Race Report: The Heart of America Marathon
The Tallahassee Marathon